Gold Standard welcomes the adoption of international rules that will underpin Article 6 of the Paris Agreement. While not perfect, the rules adopted by Parties provide a solid foundation for governments and private actors to use market-based mechanisms to help achieve the goals of both the Paris Agreement and the 2030 Framework for Sustainable Development.

Gold Standard has, over the past few years, been preparing for the transition into the Paris Agreement, considering how we can continue to represent the very highest quality of carbon credit available, while supporting and creating new opportunities for project developers and our wider stakeholder community:

Over the next year, we will support project developers, host countries and other stakeholders wishing to move early in adopting new Article 6 rules and opportunities, through an Early Movers Programme.

We will also take steps to align our rules with the new Paris framework in a targeted way, ensuring a smooth transition for project developers while providing assurance that Gold Standard credits continue to represent the highest level of environmental integrity and can be applied in a variety of markets. We will be supported in this work by a group of market experts drawn from project development, governments, retailers, academia, law firms, international organisations, and civil society, to ensure our approach considers all perspectives and practicalities. We are grateful to all stakeholders who responded to our expression of interest for this group.

A lot has been written about the Article 6 outcome at COP26, and we expect that many of you will have been following this closely. We wanted to share some of our key takeaways, to support stakeholders in understanding what the decisions mean for them.

This means that governments have decided that a corresponding adjustment is not only a tool that can be applied for transfers between two countries, but that host countries can also choose to apply an accounting adjustment for mitigation (such as carbon credits) used by private entities – including companies in the voluntary carbon market. This is an important outcome, given the growing recognition that a corresponding adjustment can provide a safeguard for buyers looking to ‘offset’ their emissions, ensuring unique ownership and assurance that their offsetting claim will not be undermined by the displacement of other action within the host country to meet its NDC.

As well as the Article 6 outcome, COP26 also saw the announcement of the first letters of authorisations – a commitment to apply corresponding adjustment - granted to projects that will generate credits for the voluntary carbon market, as well as an indication by several major companies, including BMW, that they would look to source correspondingly adjusted credits. We welcome these developments and will shortly introduce a new process that will make it possible for credits authorised under Article 6 to be issued and transacted through our registry, with provisions to transparently tag authorised credits, track the application of corresponding adjustments and avoid double counting.

As was also expected, the Article 6 decision recognised that not all carbon credits will be correspondingly adjusted, and that there will continue to be carbon credits that represent mitigation that contributes to the host country’s NDC, rather than going beyond it. In fact, the Article 6.4 Decision reflects a structure that is very aligned with that presented by Gold Standard in a number of recent events: 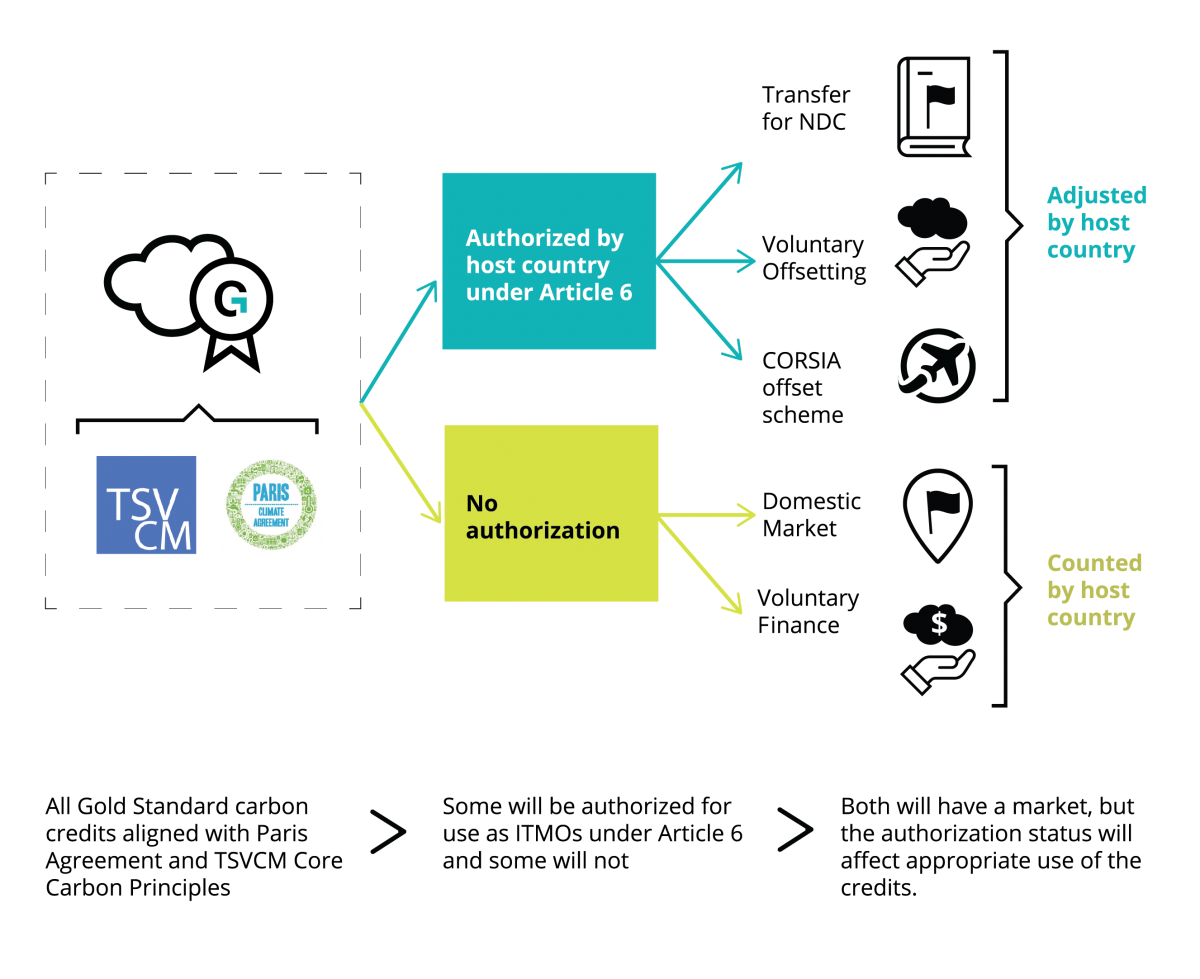 While governments did not agree – nor were they ever expected to – the forms of claim that can be used by companies purchasing credits in the voluntary carbon market, the Article 6 outcome does provide a framework for the two routes for voluntary climate action that Gold Standard – and others - have envisioned:

We continue to consider both routes to play important roles and have credibility, provided they are used and claimed correctly and transparently. We see an important role for civil society, such as via the Voluntary Carbon Market Integrity (VCMI) Initiative to provide clear guidance on how buyers should treat credits which are and are not adjusted, and how the market can transition over a period of time towards a Paris-aligned claims framework. We look forward to working with the VCMI, and with partners across the market, towards this end.

Guidance for the new crediting mechanism established by Article 6.4 includes more ambitious requirements for methodology design and baseline-setting than under the Clean Development Mechanism, which is a welcome step forward. Alongside this, the guidance for Article 6.2 specifies that all mitigation outcomes must come from activities in which baselines have been set in a conservative way with ‘below business-as-usual emissions projections’ that take into account existing policy, uncertainties in quantification and potential leakage.

In our February 2021 consultation, Gold Standard indicated that we would assess our existing approach to baseline-setting and the assessment of additionality following the outcome of COP26. We will now begin to do this, seeking to ensure our approach reflects new realities and best practice under the Paris Agreement, while at the same time ensuring a smooth transition for existing projects.

Transition from the Clean Development Mechanism

As well as allowing a limited number of Certified Emission Reductions (CERs) to be used towards countries’ NDCs, governments agreed at COP26 that projects will be able to transition from the Clean Development Mechanism to the new Article 6.4 mechanism. They will not be able to receive issuances for post-2020 emission reductions unless and until they have done so, with credits then issued under the new mechanism. This is relevant for Gold Standard-labelled CDM projects.

This transition will need to be requested by the project or programme of activities by the end of 2023, and then approved by the host country by the end of 2025. While this lifts some uncertainty for CDM projects, it creates a new uncertainty as to whether and when such approval will be granted. Once a project has transitioned, it will be able to apply its current CDM methodology until the earlier of the end of its current crediting period or the end of 2025, when it will need to apply an approved methodology under the new Article 6.4 Mechanism.

Earlier this year, Gold Standard introduced a simplified procedure for projects seeking to transition from the CDM or other standards to Gold Standard for the Global Goals, including safeguards to ensure older projects seeking to transition face a risk of discontinuation without sustained carbon revenue. This remains available for projects to use. We will also consider the precedent provided by the Article 6.4 decision in terms of the transition from existing to new Paris-aligned methodologies as part of our next steps.

Finally, governments agreed that when credits are issued to projects registered with the new Article 6.4 mechanism, a portion (5%) will be earmarked and sold to raise revenue for the Adaptation Fund, and another portion (a minimum of 2%) will be cancelled in order to achieve an ‘overall mitigation in global emissions’. These mandatory levies were not included for transfers of mitigation outcomes outside of the Article 6.4 mechanism. Parties and stakeholders using adjusted credits through other approaches, such as Gold Standard, were instead strongly encouraged to both commit to contribute resources for adaptation, and to cancel credits to deliver an overall mitigation in global emissions. We expect there will be users of Gold Standard who will want to apply at least one of these, so we will consider how this will be made possible.

In the summer, we set out a vision for the future evolution of carbon markets, envisioning a market defined not by distinct voluntary and compliance systems, but by one market used for different purposes that will evolve over time. The Article 6 decisions provide a good foundation from which to build towards this.

Over the next years, our standard will be used by governments, by airlines under CORSIA, and by organisations and individuals striving to invest in high-impact activities beyond their value chain. We will issue and label credits that will be adjusted and accounted for by host countries under Article 6 but will also issue and label credits that will not be adjusted, and so will sit outside of the Article 6 framework while still contributing to the Paris goals. These credits will have different use purposes, but all will reflect the highest level of integrity and contribute positively to sustainable development.

Our evolution will be informed by the outcome of Article 6, but also by new norms emerging from the Integrity Council for the Voluntary Carbon Market, from ratings systems such as the Carbon Credit Quality Initiative, and by new market innovations, particularly opportunities to streamline processes and expand our reach through digitisation. Our path forward will be informed by engagement and partnership with our community of project developers, VVBs and other stakeholders, with whom we wish to build for a climate-secure and sustainable future together.